Boat Platypus Swordfish: the most interesting - under the keel 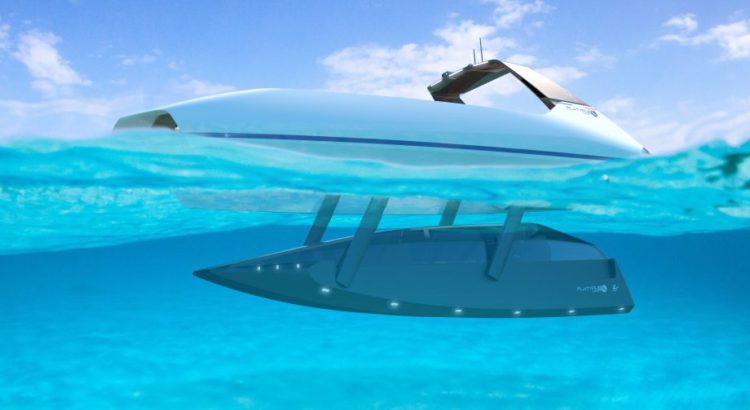 The concept presented by the French company Platypus Craft is a unique planing boat with a semi-submersible passenger cabin.

Even if the Platypus Swordfish were a simple boat, it would still be able to attract the most attention, thanks to its expressive and at the same time simple design, as well as attractive technical characteristics.

The vessel is available in two versions - hybrid, when two gasoline engines with a capacity of 900 hp. complemented by two 80 kW electric motors, and fully electric, with two 500 kW electric motors. The maximum speed of the hybrid reaches 50 knots, while the electric version reaches 40 knots. Cruise speed in both cases is 18 knots. At the same time, the battery charge of the electric model is enough to overcome 115 nautical miles.

But the main feature of the Swordfish lies in the semi-submersible cabin with a transparent top, capable of accommodating 8 people. If you want to make an underwater trip, tourists sit in this cabin, which, with the help of special hydraulic levers, descends several meters under the water. At the same time, a kind of catamaran remains on the surface. The movement in the semi-submersible position of the hybrid version is carried out by means of electric motors, while the maximum speed can reach 12 knots.

In the surface position, the cabin acts as a cabin and can be completely open. It takes a matter of minutes to complete the dive. At the same time, the cabin is completely sealed beforehand and in a submerged position, air is supplied to it using a special pump. The creator of the project and the founder of Platypus Craft, Francois-Alexandre Bertrand, states that the idea of such a vessel came to his mind 10 years ago. Also, according to him, the company is already close to signing deals with several clients from the US and the Gulf countries. And if everything goes smoothly, then the production of Swordfish will begin as early as 2021.