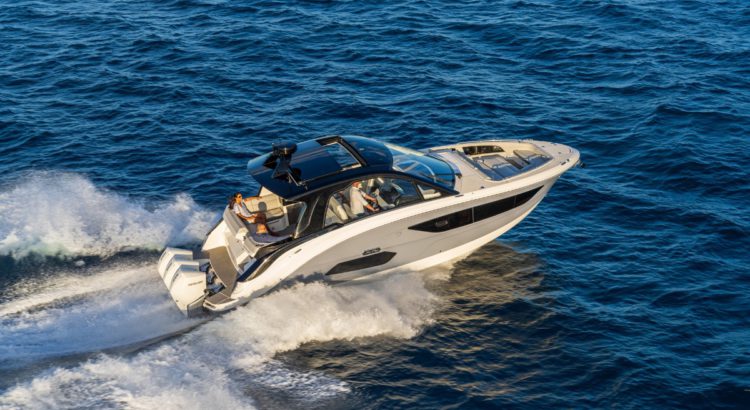 The result of the collaboration between the American shipbuilder Sea Ray and the German design studio BMW Designworks was the luxury boat Sundancer 370 Outboard.

The novelty was created for the 45th anniversary of the launch of the Sundancer series and for this reason everything possible was done to make it great. Moreover, both in terms of technical characteristics and design. The latter received a lot of attention, which is not surprising, since one of the first designers of Sea Ray was none other than Harley Earl, the father of the Corvette.

Before starting development, the designers conducted a special study aimed at finding out what exactly modern yachtsmen need. As a result, they identified 4 words that were supposed to describe the new creation - graceful, confident, athletic, expressive. It is on their basis that the 2021 Sundancer 370 Outboard was created, with smooth lines, subtle curves and a distinctive U-shaped cockpit.

The latter is partly open and is the perfect place for dinner parties. It has a bar with a sink and a Kenyon flameless grill. If desired, the cockpit can also be equipped with additional teak tables and a refrigerator. Below deck is a stylish accommodation perfect for day trips or weekend cruises in maximum comfort.

The developers have made every effort to make the best use of all free space. As a result, the boat appears larger on the inside than on the outside, with enough room for a separate shower and a spacious galley and queen-size bed in the bow. The large L-shaped sofa can also be converted into a comfortable sleeping area. In order to have something to entertain during cruises, the developers have provided a smart TV.

High-quality natural materials, perfectly combined with each other, were actively used in the design of the interior. There is nothing too cold or too bright, the color scheme is as balanced as possible. And developed glazing means maximum natural light.

Combining performance and beauty, the Sundancer 370 Outboard is the pinnacle of an evolution of the iconic Sundancer line that has set a new standard for luxury sport cruisers. Novica is already available for order to customers from North America. Sales in other countries will start a little later.