Elling goes across the Atlantic 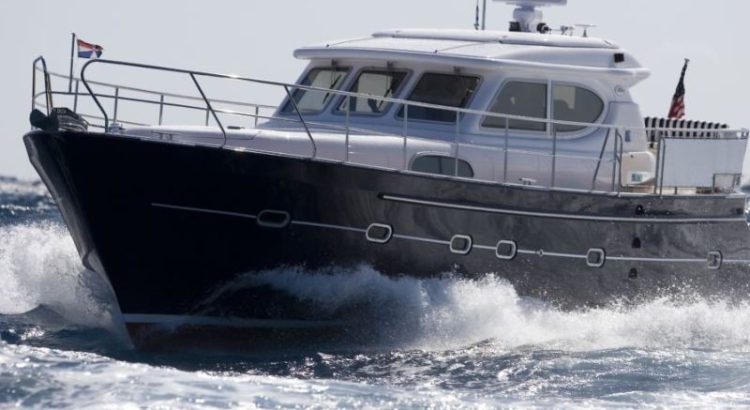 The day before yesterday, the mega yacht Samar under the flag of the Cayman Islands set sail from the Sochi seaport.

This December, three luxury motor yachts up to 15 meters long will leave the Canary Islands for a transatlantic voyage to the Caribbean.

The participants in the transition will be specially equipped serial yachts ELLING E4 - semi-displacement boats, the production of which at the Neptune Marine Shipbuilding shipyard in Aalst (Holland) has been going on for eleven years. One of the most unique features of these yachts is the category A assigned to them by the European Union, indicating that the boat is able to overcome the ocean with winds of more than 8 Beaufort and wave heights of more than 4 meters. Of course, for most owners, this is just a safety assessment indicating that even access to the ocean is allowed, and even more so, you can be sure that you and your family will reach a safe harbor when returning from a trip to the English Channel or the North Sea. However, so far no one has crossed the ocean on the ELLING. And now Neptune Marine and Adventurer Yachts LLC (the exclusive distributor of ELLING yachts in Russia, Ukraine and Kazakhstan) have decided to organize a transatlantic passage from the Canary Islands to the Caribbean Sea for the three owners of ELLING yachts. Preparations for the action are in full swing. The composition of the participants is determined. These are three ELLING E4 yachts owned by Russians. They have already been built and moored at the berths of the NEPTUNE MARINE factory in Aalst. The crew of each yacht is three to four people. In addition to yacht owners and their guests, among the participants are Anton van den Bos, co-owner and director of NEPTUNE MARINE (captain of the flagship yacht), Alexander Rubinov, director of ADVENTOR YACHTS (he is also the organizer of the passage from the Russian side and captain of the second yacht), guest captain of the third yachts Sergei Afonin (part-time journalist).

We know that sailing across the Atlantic on a powerboat less than 15m is a serious adventure, however, we do not believe that we are taking reckless risks, as our boats meet EU Category A safety standards, having:
1. The body is fully reinforced with twaron - a fabric made of aramid fibers with bulletproof properties. This material is able to withstand a collision even with a submerged container. If ordinary fiberglass fabric becomes cracked upon impact, the twaron absorbs the impact energy and small dents appear on the laminated surface, while the integrity of the case is maintained.

2. Stability, excluding capsizing. This means that in the worst case, when a super-powerful wave attacks the ship, capsizing it, the ELLING immediately returns to the upright position. This is typical for most sailboats, which have a cast keel with a bulbous fairing, which provides a low center of gravity. This circumstance was taken into account when designing the ELLING: all heavy equipment (engine, generator, compressors of the climate control system, etc.) are placed as low as possible. Also, when capsizing, the wheelhouse, with an air bubble inside, simply prevents the boat from staying in the capsized position.

3. Windows of a simple flat design with double glazing, used everywhere on commercial ships, provide monobloc strength to the superstructure. Of all the dangerous situations that can happen in stormy conditions, the greatest threat is a direct impact of a wave or driftwood that breaks windows.

ELLING, like most commercial ships, has one main engine. There are several advantages associated with this: Low center of gravity. Increased usable volume: while on the ELLING, you feel like a guest of an 18-meter vessel, despite the fact that the true length of the hull is only 14.95 m. Access to the engine room is not difficult in any way. On a two-shaft boat in the engine room of the same size, you have to literally squeeze between the engines to do a daily inspection. As a result, you begin to neglect these inspections. At the same time, on the ELLING you get access to all serviceable parts of the engine through a removable galley wall.

However, there is always a fear on a single-shaft vessel:
And what happens if the engine suddenly fails in the middle of the ocean, and even worse, if you, in addition, with a wind of 8 points, find yourself near a rocky coast?

On the ELLING you can start the auxiliary console engine - it is offered as an option for those who are preparing for serious sailing in stormy seas. It is installed under the berth in the aft cabin and is equipped with a self-contained fuel tank, which will come in handy if the fuel in the main tank becomes contaminated. If this happens on a twin-shaft boat, all that remains is to wait until the second engine also stalls. Cantilever engine 30 hp will give you a top speed of up to 6 knots and give you 5 knots on a long voyage.

ELLING is a semi-displacement yacht. This means that it can move much faster than the maximum speed of a purely displacement mode (in English terminology - “hull” speed), in our case equal to 8 knots. And we really have a maximum speed of up to 20 knots, and a cruising speed of 14-15 knots. The planing vessel will go faster, but at the cost of deteriorating performance in the displacement mode. The semi-displacement option is equally good at both low and high speeds. ELLING implements maximum speeds in emergency situations - to avoid collisions, to get away from an impending storm, and also just for the mood, "for courage". The most advantageous sailing mode is at "hull" speed; for ELLING it is worth stopping at 7.5 knots. Specific fuel consumption at this speed is only one liter per mile, which corresponds to 7.5 l / h (very handy in our time, when fuel is constantly becoming more expensive). With a standard fuel capacity of 1,500 liters, ELLING at a speed of 7.5 knots is capable of covering a distance of 1,500 nautical miles.

But this is not enough for a transatlantic crossing of 2500 miles! Let's say it's possible on 6 nodes, but we choose 7.5 nodes. Therefore, on each boathouse on the bow deck (sandeck) an additional soft fuel tank with a capacity of 800 liters is installed, plus a hard plastic tank for 400 liters on the aft deck, and another 200 liters are placed in 20-liter canisters.

All three boats have the most modern navigational equipment. Two of them are equipped with Raymarine G 150 navigation systems with a 4-foot external radar antenna and a 15-inch display. They are connected to the GPM 400 processor, which contains a set of navigation maps from around the world. This whole set costs a fortune, but Raymarine provided it for a fair price as they know the BOAT's capabilities allow this set to be used in real life sailings.

What is the "salt" of the transition?

So, three motor yachts of the same type are sailing across the Atlantic. So what? - experts will say - This has already happened: in 2004, a squadron of 18 Nordhavn yachts from 40 to 90 feet long, built by the American company PAE, made the transition from the US east coast through Bermuda and the Azores to Gibraltar. Among them were the same type, but there were several types, and yachts over 60 feet long acted as an escort. Notice the difference - the Americans had two calls with long stops and refueling, there was a solid escort. The Americans, with their usual aplomb, then declared that this was the first transatlantic crossing of trawler-type yachts in history (according to American estimates, ELLINGs also belong to this type of yachts). So be it, but it should be emphasized that our transition will be non-stop and without insuring "guardians". And one more thing: for the first time, 50-foot semi-displacement yachts are sailing as a group. However, our goal is not records, our goal is to demonstrate the transatlantic potential of ELLING yachts in practice. This transition will naturally give further impetus to the development of the new 60-foot ELLING E5, which was conceived from the very beginning as a yacht for circumnavigating the world.