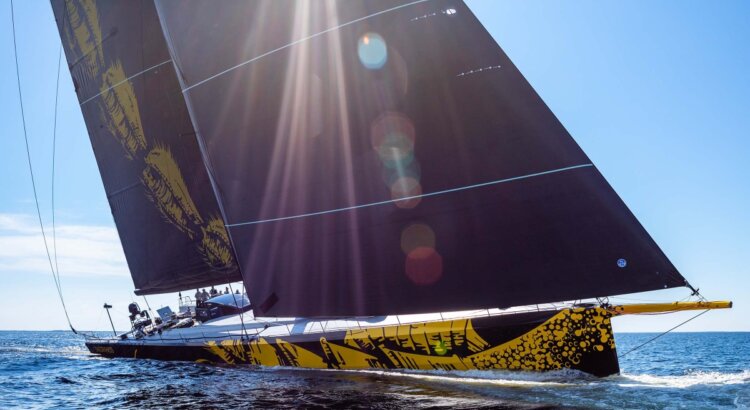 The latest flagship Nautor's Swan was designed and built to be the fastest monohull ever built.

ClubSwan Yachts is a division of renowned Finnish shipyard Nautor's Swan that specializes in high performance sailboats. Its specialists have repeatedly managed to create magnificent vessels, attractive in appearance, thought out in detail and demonstrating excellent driving performance. But appearance of the ClubSwan 125 eclipsed all previous achievements.

Russian businessman Dmitry Rybolovlev has given Nautor's Swan the daunting task of building a large, high-speed sailing superyacht capable of breaking records. The ship, named Skorpios, was under construction for four years and managed to attract attention even before launching. The exact cost of construction is not reported, but, according to some sources, it is about 20 million dollars. The name is given in honor of the island in the Ionian Sea, which is owned by a businessman. This name also bears his sailing team, consisting mostly of Russians.

The total length of the yacht (with bowsprit) is 42.6 m, with a maximum beam of 8.75 m; the maximum draft reaches 7.4 m (it can change due to the tilting keel). At the same time, up to 1961 sq.m. can be raised on a 55-meter carbon fiber mast. sails. Working on such an extreme project as ClubSwan125 forced the developers to think outside the box, not just relying on existing experience, but expanding the boundaries. The creation of the exterior and interior (simple, but at the same time stylish and extremely functional) was carried out by the famous naval architect Juan Kuyumjian.

When creating the boat, modern materials were actively used, light, but at the same time very durable, due to which its weight is only 60 tons. In terms of design, the ClubSwan125 is both similar to other Nautor's Swan creations and has a unique line at the same time. This vessel was designed to be successful in offshore racing and to break all single hull world records.

Huang Kuyumjian stated that he "genuinely believes that the ClubSwan 125 will raise the stakes in the world of sailing and be a milestone for the entire maritime industry." And judging by how rave reviews the novelty has collected and how much attention it has attracted, this has already happened. However, the sailboat has yet to show itself in action. And the first race he will take part in will be the Rolex Fastnet Race on August 8th. Skorpios will also take part in the Middle Sea Race in October 2021. The team is more than optimistic and expects to be able to break several records at once.

It only remains to add that Skorpios is already the 4th yacht of Dmitry Rybolovlev. The very first was the Anna I, built in 2007, followed by the 110-meter Anna, both built by the Dutch shipyard Feadship. In addition, the businessman owns the racing sailboat Skorpios, which took part in the Nations Trophy regatta, managing to take first place. It should be noted that Rybolovlev himself was at the helm. And there is nothing surprising in the fact that this man, passionately in love with sailing, wanted to become the owner of a real record-breaking ship.

According to the businessman himself, despite his busy work schedule, he “tries to participate in as many races as possible, because no other sport gives him so much freedom and causes him so many emotions.”