Karl Lagerfeld turned an electric surfboard into a designer accessory 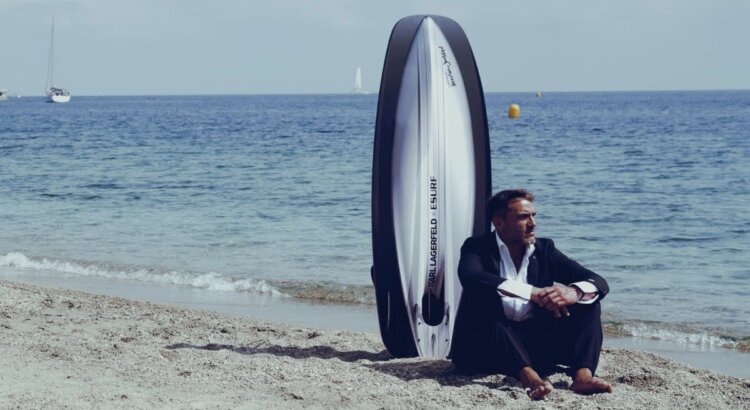 The Karl Lagerfeld X Esurf electric surfboard is not just a water sports device, but also a fashionable and stylish item.

During his distinguished career, Karl Lagerfeld managed to take part in the creation of a variety of items - from crystal glassware and crayon sets to helicopters. Now his name will show off on electric surfboards - water transport, which appeared quite recently, but has already managed to attract the closest attention to itself.

In order to ride on an electric surfboard, you do not need waves, they are perfectly replaced by a built-in motor. At the same time, Karl Lagerfeld X Esurf is capable of speeds of 64 km/h. A single battery charge can last for 45 minutes of riding, while a full charge takes 2.5 hours. The board weighs 25 kg (with battery) and is able to withstand a person up to 100 kg in weight. The presence of a special magnetic key ensures that the board does not float away if the rider falls off it.

The Monaco-based company behind these surfboards, Esurf, was founded in 2020 by Flavien Neiertz. Karl Lagerfeld X Esurf was developed with the help of Karl Lagerfeld's former bodyguard, Sebastien Jondeau, who is known for his passion for water sports. In addition to the name of the famous couturier, the board also bears the inscriptions “21 Rue Saint Guillaume” (the Parisian address of his headquarters) and “By Sébastien Jondeau” (a reminder of who the board was designed with).

The exclusive surfboard is already available for pre-order on the official Esurf website at a cost of 25,000 euros. It is also possible to purchase an additional battery for 4500 euros and various accessories.

Lead time is stated to be three to four weeks. At the same time, delivery is possible worldwide, excluding mainland China and the United States.