Features of a land sailboat - buer 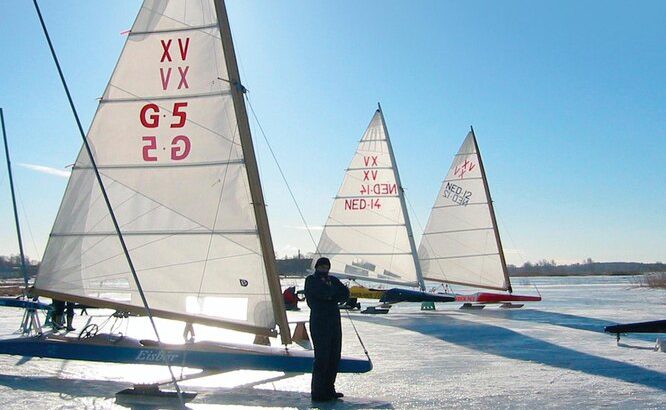 A buer is a vessel, a small boat or a special platform mounted on steel skids, designed to slide on ice and equipped with a mast with a sail.

Having no drift, such a boat is able to move at a speed that significantly exceeds the speed of the wind. Modern iceboats can develop this indicator up to 150 km/h. At the same time, the control of a land sailboat has much in common with the control of a traditional yacht, however, it requires more skill from the pilot, which is associated with a higher speed of movement.

Some argue that the first boats began to make fishermen of the northern seas and lakes. In winter, they mounted skids under the bottom of sailing boats and thus traveled on ice. Others believe that iceboats were invented in Holland in the 18th century. In Russia, the first land ship appeared in 1819 at the Admiralty shipyard in St. Petersburg. Nothing is known about its size, but experts suggest that it was rather big.

Driving a buoy requires incredible concentration and skill. This is related to two things. Firstly, the sail acts as a wing and thanks to this the yacht is able to go faster than the wind. Secondly, when riding a sailboat, it is not the true wind that acts, but the pennant wind, which is the sum of the true wind and the course wind. In some directions, the apparent wind can be much stronger than the true one, which helps to increase the speed of the boat. This effect is called “running into the wind” and it is especially noticeable in the sailing sport. This feature makes riding on a buer as fast and "adrenaline" as possible. Truly courageous and stubborn athletes take part in competitions on land boats.

The main element of the buer is racing on ice. Official competitions in this sport began to be held in the second half of the 19th century. Today, the largest boat association is IDNIYRA, founded in 1956. World Championships are held every two years in America and Europe. In Russia, the Cup and Championship of the country are held annually, organized by the Russian Association DN - a member of the International Boating Association.