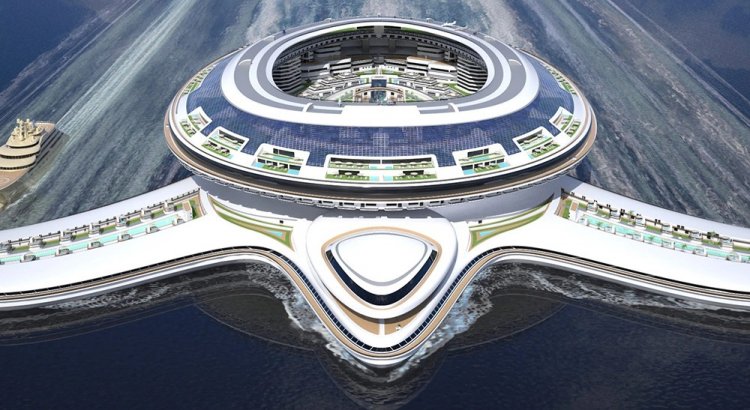 Pangeos Terayacht could become the largest floating structure in history

The Italian Lazzarini Design Studio, known for designing flying yachts and futuristic seaports, has unveiled another mega project for the Middle East market. Designers propose to build a floating city in the form of a huge sea turtle in Saudi Arabia.

The cost of the Pangeos Terayacht project is expected to be $8 billion. The floating city will reach 610 meters in length. Its areas will house 19 villas, 64 apartments, as well as several hotels, clubs and parks.

According to the concept, the city will be powered by nine HTS electric motors with a capacity of 16,800 hp. each. As planned by the engineers, Pangeos Terayacht will carry up to 60 thousand guests, with a speed of five knots. It is noted that the ship will be able to move without stopping, having an infinite supply of “green” energy. The floating city will be covered with giant solar panels to generate clean energy from the sun, and will also be able to draw on wind and wave energy.

The interior of the ship will be mix of a five-star resort, a cruise ship and a mini-city. There will also be a shopping mall, gardens, pools and a beach club, helipads, hangars and space to store tenders and water toys on board.

If the Saudi authorities agree on a new megaproject, the construction of a floating city in the port of King Abdullah will begin in 2033 and will take about eight years. Once completed, Pangeos Terayacht could become the largest floating structure in history. To raise funds for the project, Lazzarini may launch Pangeos in the metaverse.